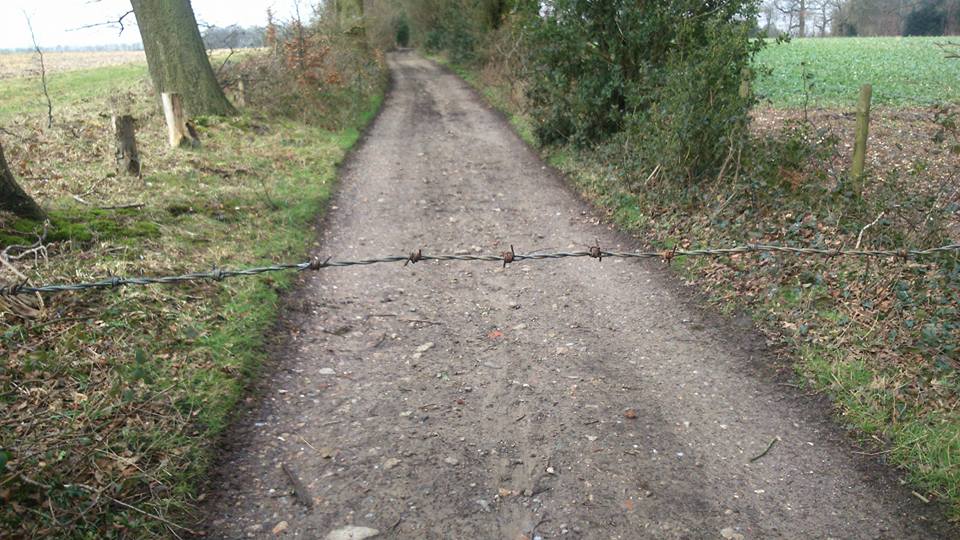 You’re riding along your favourite trail, safely away from the cars on the nearby road.

You can hear birdsong from across the fields interspersed with the the gravel crunching underneath your wheels as you finally crest the top of the hill.

You can that there are no walkers or horse riders further along the path so you let the brakes off and concentrate on a spot on the ground 20 feet or so ahead of your wheel and increase the speed on the deserted downhill.

Suddenly, you’re inexplicably thrown backwards off your bike. A sharp lascerating pain across your throat and your jacket is wet with crimson blood.

That’s all you know before your eyes close.

A horrifying and chilling thought but still, surely it’s one could that never happen?

On a weekday ride in Kent, it nearly did.

A saboteur had set a barbed wire trap across a public bridleway.

Fortunately in this case the cyclist, Daniel Webster, had chosen to ride up his favourite climb rather than down it.

We tweeted them out for the MTBers we know that ride in that area.

High enough to catch you in the throat if you’re down low or in the eyes if you’re sitting upright.

Thin enough that you wouldn’t see if it if the sun was in your eyes or you had mud or condensation on your glasses.

All in all an incredibly evil thing for someone to have done.

But Is this a 101 scenario or a 999 scenario to get the trap removed and checked for fingerprints?

We were comfortable tweeting this out warning riders to keep a look out for something you can barely see, then something strange happened – BBC Top Gear’s James May retweeted us to his 2.4 million followers and it suddenly became news. (No we didn’t know he kept an eye on Bikesy either. Maybe he likes looking out for deals on ex-demo electric bikes as much as we do?)

At this point the story suddenly took on a different turn. What if Top Gear followers are rabid anti cyclists and this gives them sinister ideas?

Fortunately the majority of the retweets and comments were rational and suitably outraged. It was also noted, quite rightly, that this could also affect horse riders, children, hikers and even off road motorcyclists using byways. There were the unfortunately tweets of petrol fumed intense hatred towards cyclists but in the world of Twitter opinions are regularly extreme and uncensored.

The newspapers then got involved. Daniel Webster, the original MTBer who found and photographed the trap had already been in touch with Kent Online.

The Mirror and The Metro ran the story based on twitter posts and twitter reactions. We had other journalists getting in touch who had seen our tweet and we were able to get them in touch with Daniel.

The Daily Mail did a good piece where you can read more of Daniel’s reaction.

Thanks to Daniel (and James May) the word is well and truly out to local riders to watch out.

We thought that would be the end it but we started getting reports that this was going on in other parts of Europe. Twitter users in Belgium and France told of similar problems on hiking trails and we received a very nasty picture from Spain that is self explanatory.

And that’s aimed at hikers…

Now as cyclists we know all too well that the media try to create an ‘them’ and ‘us’ mentality amongst there readership thinking it makes for good clickbait or sells more papers. Maybe it does, but we think it also goes to fuel an underlying level of animosity in certain sections of society towards other people who choose to use two wheeled non polluting vehicles rather than 4 wheel polluters. Forget the labels of ‘cyclist’ or ‘lycra wearer’ for a moment – that’s all we are – people who use two wheels for a larger proportion of our journeys than others who exclusively use four wheels. Someone, somewhere, decided that it would be a good idea  to stop a bicycle user with potential lethal barbed wire and cause damage like this…

All too often we hear of the police doing nothing in situations like this but one good thing has definitely come out of Daniel Webster’s photos and the media interest that followed – We heard from Daniel that the police had already been to the scene on Saturday lunchtime and were working on it.

We hope they catch the perpetrator and throw the book at them.