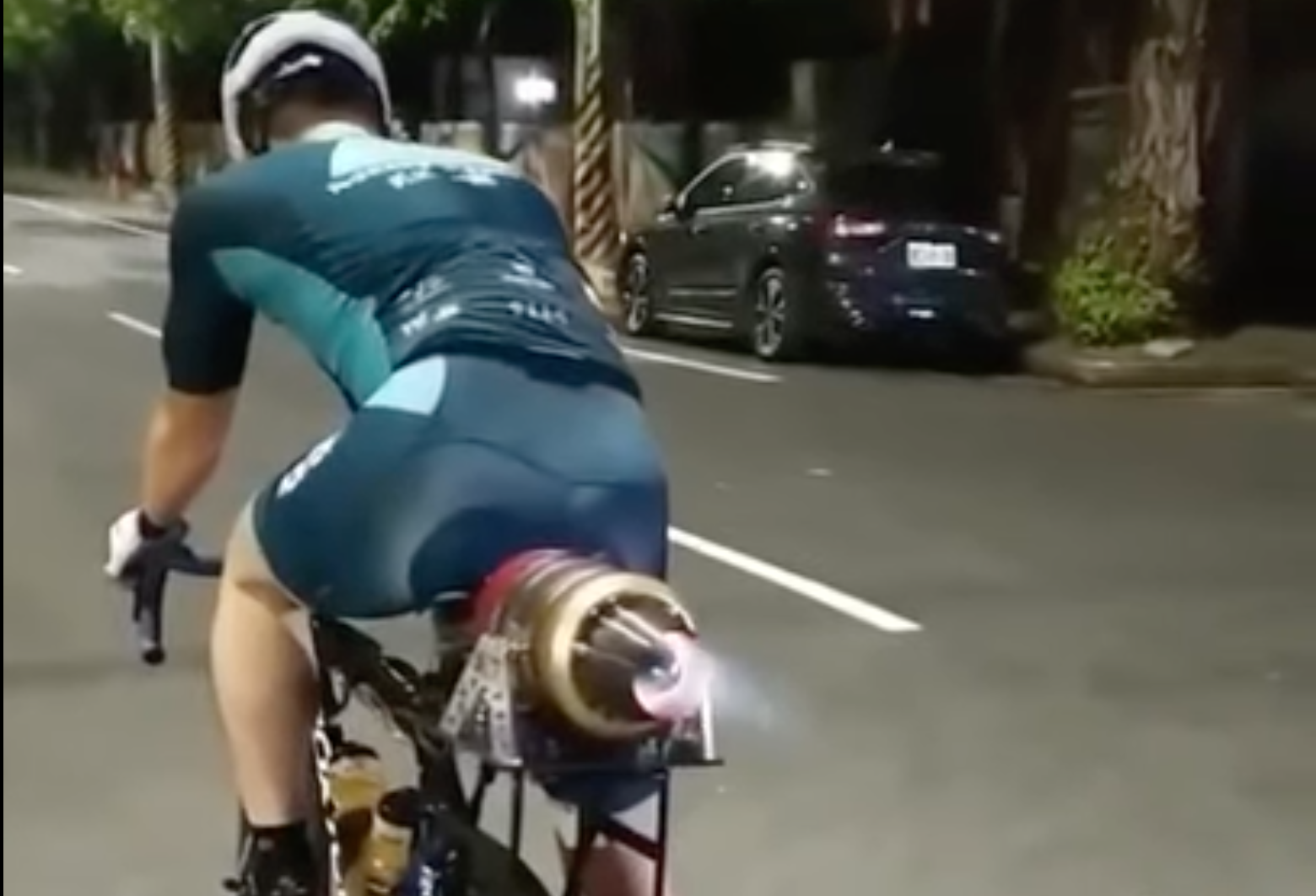 A keen Taiwanese cyclist nicknamed the ‘Tainan Tony Stark’ fitted a jet engine to a custom built road bike, took it for a test spin at 81mph(130km/h) down his local street, and received a visit from police after footage of him breaking every speed limit on the island spread on social media.

When Wang Nan was growing up he always dreamt of having his own jet engined model aeroplane, but never had the means of affording one. Fast forward to 2021 and Taiwan resident Wang went one better and made a jet engined bicycle that could actually be ridden.

Finding a bike that could accommodate the thrust of a jet engine was going to take some work so Wang got in touch with Taiwanese bike company RoxCycle, for a specialist carbon fibre frame that would be up to the job.

He then tapped into the expertise of local academic professors who came up with a solution that could handle the external forces a jet engine would place on a carbon bicycle frame.

The whole project took Wang and his team about three weeks to assemble, mainly because of upgrades needed to the braking system on the bike to ensure it could cope with the high jet powered speeds involved.

He also had to source upgraded tyres that could cope with the higher forces while providing grip when attempting to slow down from 80mph.

Wang’s team also faced issues with storing jet fuel on the bicycle. Regular sized tanks were deemed too heavy so the team went with a smaller 700ml bottle giving around 30 seconds of full jet propulsion which would be enough to get Wang up to 82mph.

Wang opted to test the jet powered bike himself wearing only regular aerodynamic lycra cycling attire, with the only nod towards safety equipment being a standard cycling helmet, which generally aren’t tested or approved for use in jet powered cycling accidents. Protection for Wang’s private area, should there have been a catastrophic accident on the road, was completely absent.

Opting to use a local residential street late at night, the jet powered bicycle shattered the peace in the genteel neighbourhood by emitting 133 decibels into the quiet night air as he embarked on his first test run while hitting 81mph(130km/h).

Footage of the high speed test-run subesquently went viral on Facebook with commenters calling Wang the “Tainan Tony Stark”, after the daring protagonist of the Ironman movies.

Taiwanese Police then visited Wang after viewing footage on social media, but initially struggled to find a law that had been broken, before settling on a small part of the Taiwanese Road Traffic Management Regulations and Penalty Act; namely article 72, paragraph 2:

Should a slow-moving vehicle be altered without permission, or its safety equipment such as brakes, bells, lights, or reflective devices not kept intact and in good condition, the vehicle’s owner shall be fined NT$180.

And if you’re wondering how much the fine for this daring feat of bravery is going to cost Wang, NT$180 works out to about $6.50USD or £4.71… We can’t help thiniing that if Wang had souped up an e-bike with a custom kit he could have hit even faster speeds on private land and escaped the fine completely!