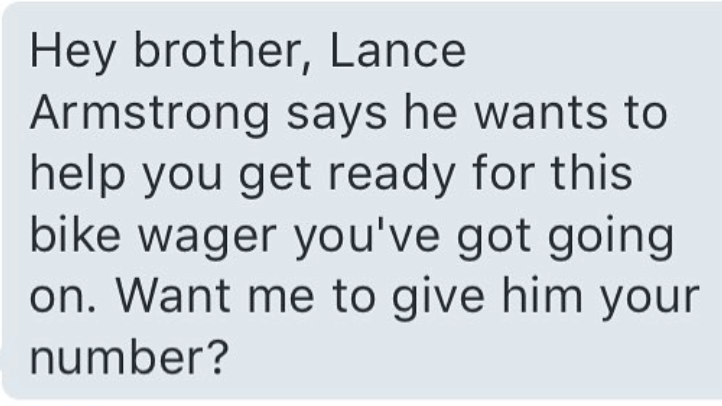 Love him or loathe him you’ve got to hand it to Dan Bilzerian, he certainly knows how to make a statement.

Whether winning high stakes at the poker table, showing off his array of guns and girls or being the subject of questions around where he got the family wealth from there’s no denying 35 year old professional poker player/internet celebrity/former US Navy Seal trainee doesn’t let life’s challenges idly pass him by.

There may be one challenge however that may be too much for Bilzerian to complete – his buddy and famous poker player Bill Perkins has challenged him to ride the 330 miles from Los Angeles to Las Vegas. In 48 hours. With just 30 days to go from non-cyclist to ultra cyclist.

A wager was set at $600,000 and, amazingly, for someone who doesn’t ride, Dan Bilzerian accepted the challenge.

Yes, that’s six hundred thousand real American dollars on the table, either coming out of Bill Perkins pocket and going to Dan Bilzerian if he can make the journey or being paid by Dan, to Bill Perkins, if he can’t.

Now we think this is an insane challenge, even for most club-level cyclists. If you break it up to 160 miles a day, a good amateur road racer will be pretty spent at the end of 160 miles, but then to get up and repeat the feat the next day when their body feels like shit and is in shock from the effort doled out… we don’t think there are many people who can do this.

Other factors to consider are…

Can you prepare to ride 330 miles with only a 30 day preparation time?

We reckon a challenge like this is going to be half mental and half physical. With a heart rate monitor recording effort for the duration of the whole journey it should be possible to ride consistently and stay well out of the red zone, meaning that in a perfect scenario given a comfortable riding position and  enough fuel, the body can keep riding all day.

10 miles per hour is pretty relaxing, it’s just a case of being able to do it for 15 hours each day. The downside to travelling at this speed is that 330 miles can give provide an awfully long time to dwell on the challenge itself, and subsequently provide the time and pain to allow the mental chatter to talk you out of continuing.

So on a straw poll of experts today at Boxhill (cycling, especially Boxhill,  is full of experts) the secret to training for an event like this is to surprise yourself early on with achieving big rides. The more big rides that are in the bank the more self-belief you’ll have out on the road when the going gets tough towards the second half of the first day.

All of these rides are to be completed slowly and with the minimum of effort possible on the open road, rather than on a smart turbo trainer. There’s nothing to be gained by hammering the speed upwards whatsoever.

If you’re wondering why there are no rides in there at 165 miles, well there just isn’t time. If Dan has got himself into a position where he can ride 120 miles at the end of week three then he is equally in a position where his mental fortitude will take him the extra 45 miles to get to the magic165 miles. On the second day he’ll know he has already ridden 165 miles so it’s no worse than what he has already done. The thought of $600,000 should help keep some of the pain at bay too.

If you’re wondering why there’s no mention of sweetspot ‘time crunched’ training this is because for a non cyclist this is the quickest way to pick up injuries. More important are the not insignificant matters of getting used to a road bike position, getting used to the saddle and gently working through all of the tendon, ligament and joint niggles that are likely to make themselves known on long rides. And that’s before your stomach has even tried to digest food while maintaining a good rhythm on the pedals while out on the road.

Why are we sharing our training plan here? BECAUSE LANCE ARMSTRONG.

Yes, one time cycling hopeful Lance Armstrong has reached out through MMA commentator Joe Rogan, a mutual friend,  to train Dan for his challenge. While we admire Lance’s generosity with his time we really don’t think it would be a good look for Dan Bilzerian to have him on the sidelines, especially while there are others, better qualified, who could help out.

So, do we think non cyclist Dan Bilzerian  will complete this amazing challenge and ride the 330 miles between Los Angeles and Las Vegas in just 48 hours?

If it was anyone else we’d have to say no with 100% conviction, but Dan seems to have this tenacity that suggests he won’t roll over and quit. He’s got military experience, he’s come through two heart attacks and he doesn’t give two hoots to what anyone thinks about him, he just gets on and does what he says he’s going to do.

We think Dan will do it but it won’t be pretty. In fact we don’t even think he’ll know what day it is when he crosses the finish line.

Also, we reckon 42 hours… If anyone fancies a wager…

What do you think? Will he do it? Could anyone do it? How would you change the training schedule? Leave a note in the comments below with how you would approach it.