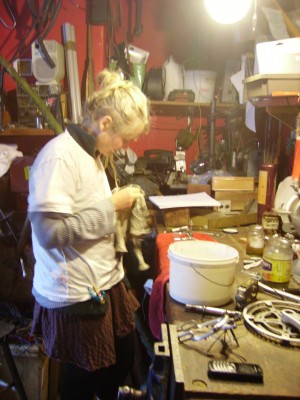 I’ve been running women’s bike mechanics sessions for a while now, knowing that for me this is incredibly empowering. The cycle shop environment is male dominated and often I have found myself watching men do things for me. This is something I wanted to change.

In a recent workshop I went into I TOTALLY realised why I started a women-only space. Before the session started two women were striping down a bike with the help of a man. Great! I thought. Sure enough, after telling the women what to do they had a go. After two or three tries they had not managed the task, the man actually took the tools out of the women’s hands and did it for them.

Lights on! Boom. That is why I know that women’s spaces are important. It might take longer, but we will get there in the end.

I got the feeling that this is happening all the time, and what it means is, although normally well meant, is that we stay stuck in the same place of not being able to do something. Some women might like the offer if help with a ‘well I can’t do it anyway’ – but certainly not all.

Another amazing thing happened later in the workshop. It made me realise that we need to have a conversation with everyone there about women only spaces. Men came into the group and offered us a cup of tea. Great! But not without some kind of bizarre comment; ‘So. Err. I’ll make the tea shall I? Me? I’ll make it for you! Goodness a man’s work is never done.’ It happened again later with the washing up. It’s not great for either gender if you can’t relate to them and have a good positive relationship with them. I hope we can get to that point with this workshop for the sake of both males and females.

I’ll let you know how the meeting goes…!