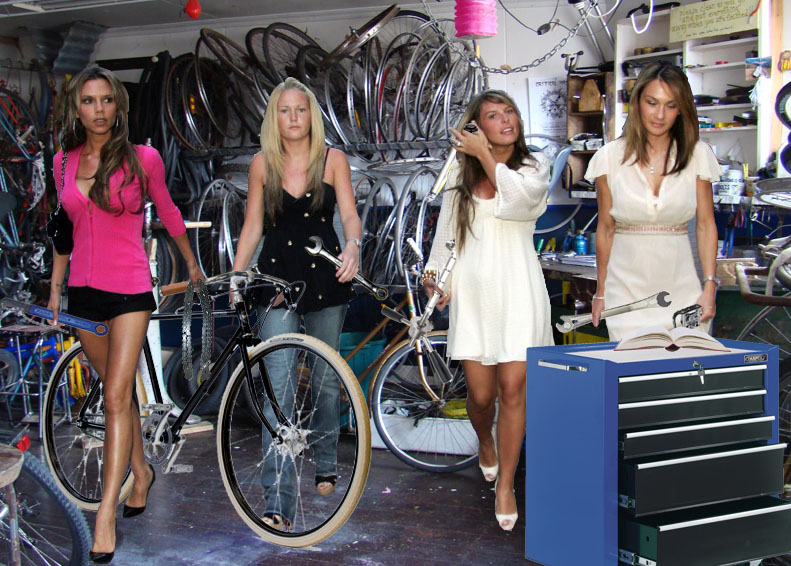 Monday night at London Bike Kitchen is W.a.G. night (Woman and Gender-variant). WaG is a dedicated space for women and gender-variant people to fix their own bikes, with mechanics on hand for help and advice. We also run (mixed gender) introductory courses (on other days) for people who are very new to bike mechanics, or want to refresh their skills. WaG includes a taught element every week, including adjusting gears, brakes, puncture repair and bike checkover.

What do we mean by ‘women and gender-variant’?
Anybody who identifies as a woman, or anybody who has a non-normative gender identity. This could mean transgender, genderqueer, ftm, mtf, transwomen, transmen, or any of the many other various identities which are not ‘male’ or ‘female’ in the traditional sense.

Why ‘women and gender-variant’ only?
Growing up, women aren’t generally encouraged to fix bikes or given access to knowledge about mechanics in general. As a result, women can feel like they can’t fix stuff themselves, or think it’s a man’s domain. All this can also be true for people with gender-variant identities. When most mechanics are men, there is a kind of heirarchy of knowledge, whereby the men fix the bikes and teach the women, and the women watch the men fix the bikes (and learn little), or are taught by the men. We want to do away with all this, and create a space where you are empowered to learn about your bike, share what you know (or just get on with it yourself!), all without the pressure and machismo that sometimes exists in male populated spaces. We offer a stand and tools, and some help and advice when you get stuck. If you’re really new to bike mechanics, you might want to take one of our introductory courses to get started.