On a rainy, sleety and snowy sunday in early March ten brave, bedraggled and rather brilliant women wearing plastic trousers mounted their bikes on a deserted street in central Oxford. The weather may have been dodgie but the atmosphere was full of warmth because we were there to celebrate women and bikes.

The bike has played a remarkable role in emancipation women all over world. Cycling was central to revolutions in women’s clothing and freedom and movement as well as changing perceptions of female athleticism and proper behaviour. But its also the source of personal revolutions. I’ve lost track of the number of friends who have told me about how discovering cycling changed their lives, gave them physical strength, confidence in their bodies, helped carry them through hard times and allowed them to explore their world freely. I too have a story like this. So I thought what better way to mark Oxford International Women’s Festival than to bring a bunch of women together to cycle about and share such inspiring tales. 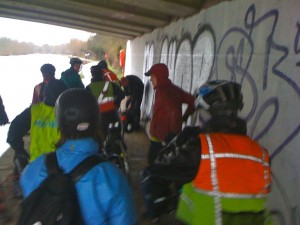 The plan was to listen to the stories of some amazing local women on route and then retire to the pub for more talk and a nice drink. But alas the weather had other plans. We where drenched by the time we reached the end of the street, so we decided to whiz round the route and do our story-telling in the dry afterwards. Some, due to a lack of waterproof layers, were forced to turn back early. But a good bunch of us made it as far as Kennington along the Thames path (not bad given it was snowing at this point) before the cold and wet got the better of us. As we shivered under a bus shelter whilst I did the quickest puncture repair I’ve done in my life we decided to cut short our journey. We headed back to the cosy refuge of the Isis tavern, to regroup.

Once by the fire we slowly regained feeling in our bodies and with it our powers of speech. Somehow having gone through a bit of adversity together had created a new openness between us and we spent the few following hours discussing bikes, feminism and our lives over tea and beans on toast. One of the best bits for me was the bringing together of a such a cool group of women, of different ages and from as far a field as Birmingham and London, and learning about what role cycling played in their lives. 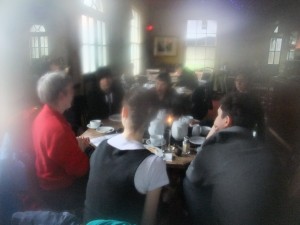 As a result of the shall we say inclement weather, only one of our story-tellers, activist Rowan Tilly, was able to stay with us and actually to say her piece. But the beauty of blogs is the power to create after the event, so what follows is my attempt to recapture some tales of some amazing women and their bikes.

Now in her 70s, Pauline thought better of joining our chilly ride and instead chatted to a few of us beforehand about her memories. Pauline knew Beryl since they were teenagers the two were brought together by a love of bikes and interest in racing. Beryl went on to be women’s cycling world champion and one of Britain’s greatest athletes. Pauline too achieved great successes and has raced everything from time trails, to trikes and tandems in her time. They remained firm friends for life.

They probably got along so well because they both learnt about work hard and self reliance from a young age. Pauline’s father built bikes on the Cowley Road, he was an avid cyclist despite having only one leg. He seems to have been a hard character who expected Pauline to hold her own – something which she freely admits set her up well for a life of competing in ‘men’s’ trades and sports. His approach is typified in a story Pauline tells about one evening when she got stranded many miles from home with buckled wheel and her dad, true to form, told her to walk back. This she duly did only to arrive home just in time to eat some breakfast and head to work. ‘People had to be tougher in those days,’ she chuckled.

Pauline talks of Beryl, who died in 96, with the warmth and pride of an old dear friend. She tells of one day when Beryl was fed up with the lazy ‘freewheeling’ of the women’s cycling club and tired of being left behind by the mens and decided something had to be done. So she secretly went out alone everyday for several weeks to work on her speed until she could rejoin the men. This work ethic and determination to achieve her best seems to sum up Beryl who ended up setting the record for the women’s 12 hour time trial – which exceeded the men’s record for 2 years! Pauline describes Beryl as a straight-forward northern women whose success in her field was built on hard grind and brought financial sacrifices rather than rewards. There was little money and sponsorship in English racing in those days, especially for women. Beryl paid all her racing and transport costs herself (so she usually cycled to events – even if they happened to be in France). As a result she couldn’t afford a television or a phone. Taking time off work to race on at lest on occasion cost her her job. And to think she was bringing up a family at the same time. I wonder what she would make of the continued lack of investment in women’s amateur racing today. 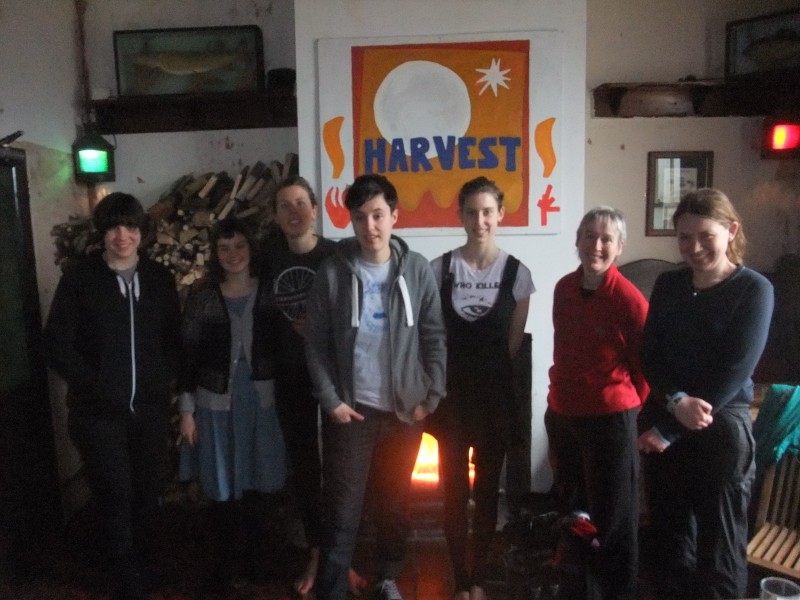 Rowan named her bike Christobel Pankhurst, because she (the bike) is often chained to railings. As a child Rowan was nearly put off cycling because she thought she no good at it. She struggled up hills on her shopper as her brother whizzed by on his boys road bike. When she realised it was the bike she was given because she was a girl and not the fact that she was a girl which was slowing her down (a metaphor for life I think) she set about to find one that suited her better. This mission was part of a journey of political awakening and practical skills learning which has meant that bikes and radical politics have always gone hand-in-hand in her life. In the early 80s it was impossible to buy good lightweight bikes small enough for women so Rowan built Christobel herself following instructions from a book, borrowing her brother’s tools and using a hand built made to measure frame. Rowans politcial activism began at Greenham Common women’s peace camp – a 10 year occupation of RAF weapons facility. And bikes were a big part of her contribution. She put her new skills to into action building 20 for the camp to facilitate better communication and mobility among the women. Rowan went on to campaign on deforestation, GM crops, weapons and climate change, she also added a recumbent named Emma Gold[wo]man to her fleet.

After Worker
From work I take the scenic route, it’s still light
Although it doesn’t feel like summer anymore – dark
Clouds crowd the edges of the sky. I cycle
Quickly, fearing the weather will shrink my world
As it soaks the streets, makes the road
Treacherous, threatening, chasing me home.

I pedal hard, conjuring images of my cosy home;
All thoughts are focused there: the warm light
Of the ochre-walled sitting room, with a view of the road
Lined with false cherry trees, their leaves now turning dark,
Their sap sinking into autumn, waiting for the world
To turn one more half-round, complete the cycle

From spring to full-blossomed, frowsy spring again. I cycle
Faster now, as though my pumping heart will bring me home
To this – the comfortable, cosy world
I have tried to make for us, where we can shut out light
And noise – the static of a crazy world – and share the dark,
Hold hands, be always linked. I’m on the road

On my way to you, guided by the markings on the road.
Will you be glad to see me?
Will you hear me cycle
Quietly through the first pitter-patter rain up our now-dark
Street? Are you preparing to welcome me home?
Are you drawing the curtains, turning on the bedside light,

Filling up the kettle, making the dinner, our world?
Or are you just waiting for the sculptor of your world
To make her way back from work, flying along the road
Wishing with all her heart for a ray of light
To pierce the twilight, nudge the rhythm of the cycle
Get some movement going, breathe air into her home, Blow, blow, blow away the dark

Mist that hangs in every corner, the dark
Dread of loss, no longer held at bay, out in the world;
Now it has invaded, has come home
To us. That avenue that led away from warmth, the road,
Now presents a route to freedom. With strengthening legs I cycle
Gladly away, loving the night air and my little flashing light.

When you look out into the dark you cannot see the road,
You cannot glimpse my world or sense me cycle
Away from home, following my light.